Thanks for your interest in our first game Washed Up!. Since I’m just in the process of pulling together the website here, so apologies for any rough edges. Please do stay in touch for more details as we approach release. You can join our mailing list on the Washed Up! site, or add this blog to your favourite RSS feed reader.

So, a little bit of background to our game to kick this off 🙂

I’ve been around game development for a while, initially as a hobby (since the 90s!) and then as a 3D engine developer on other people’s games (I created Ogre3D a scarily long time ago. Somehow though, I’ve never gotten around to seriously making a game of my own before. Time ticks on and suddenly I’m in my mid-40’s and figure: now or never, right?

Just over a year ago my wife Marie & I decided to attend our first game jam together, our local instance of the Global Game Jam 2017. She’s an artist, but it was her first time making game assets and we both learned a lot. Out of that 48 hours came the very first version of Washed Up!; it was super ropey but it worked, and we had some great positive feedback from it.

Later on in 2017 we decided to pick it up again and develop it further; we gave it a new lick of paint, added power ups and special modes, risk/reward progressive scoring, iterated the control system many times (surprising how few people will notice all the tweaks but it feels so much better than the first version!), and lots more, leading to what you see today. 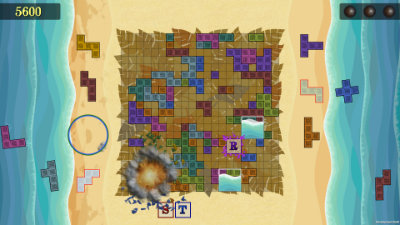 We’ve learned in this time just how many things need to be tuned and iterated on even for a really simple game like this! We’re aware of how modest our ambitions with Washed Up! are compared to so many indie game developers out there, but it was definitely the right decision to go with something this “simple” on our first time out.

The good news is that the game has been well received by the people we’ve shown it to, and Marie still plays it lots even when she doesn’t have any testing to do, which we take as a good sign. It would be rank hubris to compare our game to a certain legendary game whose name begins with “T” and ends in “etris”, but we’re hopeful it scratches a similar itch for many.

We’re nearing completion and will be expanding our beta testing soon, with a view to going more public with the game after Rezzed (if you’re attending, maybe we’ll see you there!). In the mean time, why not join our mailing list and we’ll keep you up to date.