Hello again! It’s been a little while, but we’ve been hard at work polishing Washed Up! ready for our first private beta test, which just started today. To say we’re a little nervous at handing over our first game to other people unsupervised would be an understatement, but we’re looking forward to the feedback! 😬

One of the new features we’ve added is a new game mode: “Time Attack”: 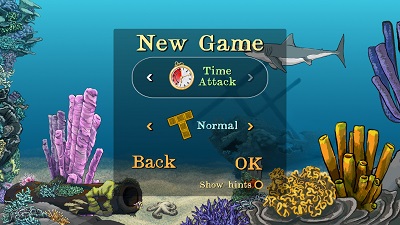 In Time Attack mode you have a limited amount of time on the clock, and the game is over as soon as it runs out. Creating squares in the center area grants you a slice of extra time, both at the time you create them (or extend them), and at the time they fill up and disappear:

Now, you can scrape along just making 3x3 squares, which in Normal difficulty gives you 5 seconds on creation and completion, but it doesn’t leave much room for error, and as you go up to harder difficulties, the time awards are lowered.

Making larger squares: 4x4, 5x5, 6x6 or more, is rewarded with a lot more time, so on paper you always want to go for those. But the easiest way to make larger areas is to extend existing ones, and each time you extend an area, it restarts the process of filling up the square. This delays when you get the final time reward, which is fully half of the total, so you need to judge when it’s a good time to go for a bigger square, or when you need to bank something smaller to keep the clock topped up.

It’s a slightly different twist on the risk/reward mechanic of aiming for larger scores that was already present in what we now call “Classic Mode”, with a little more pressure. I’ve heard loud groans of anguish from another room when Marie has misjudged it, and the time has run out half a second before a big square would have filled up and saved her. It might just be a little evil. 😈😂

We have our fingers crossed that our beta testers like this new mode as much as we do! 🤞 We look forward to letting more people try the game soon.

If you would like to to be kept up to date, you can subscribe to our newsletter on the Washed Up! site. Have a great day!